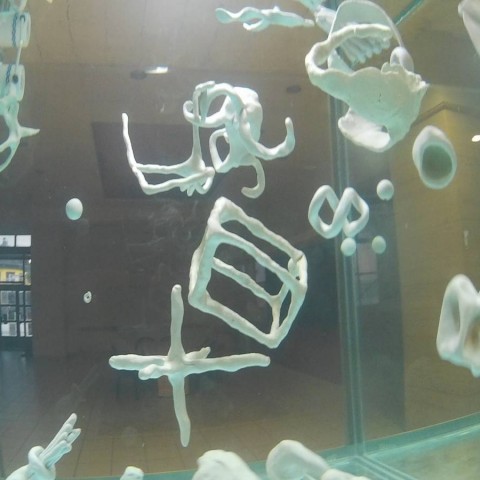 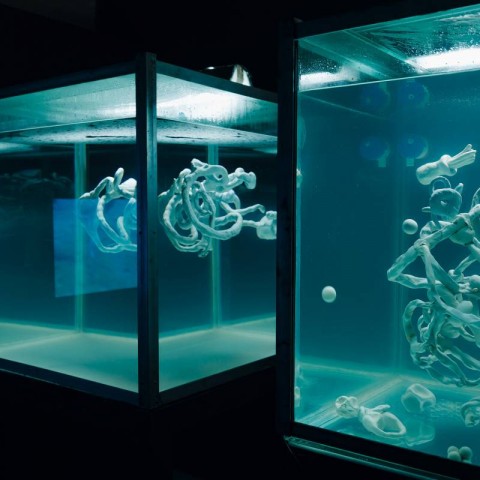 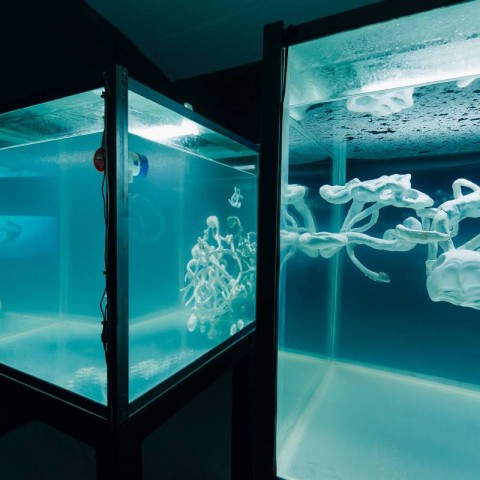 Petar Popijač, “one of the best sculptors of younger generation in Croatia” according to art critic Patricia Kiš, returns to Split for the first time since 2013, when in the basements of the Diocletian’s palace he exhibited the “Uniform”, a striking sculptural installation in ferrocement.[1] With this work, Popijač critically referred to a vulnerable position of people as individuals in society in both local and global context. Similar topics, but also those related to questioning formal characteristics of sculpture, are present in different measures in his previous and later works.

His latest sculptures, that deal with the issue of weightlessness and the physical laws that determine the movement of sculpture and people in the Universe, indirectly rely on some topics Popijač worked on before. However, conceptually, but even more artistically, these sculptures are a step forward in his development. They are a result of his doctoral research at the Academy of Fine Arts in Zagreb, under the supervision of sculptor Petar Barišić and theorist and anthropologist Suzana Marjanić. Popijač already exhibited earlier works from this research at different venues in Zagreb: in 2017 at the Vladimir Filakovac Gallery, last year at the Kamba Garage and during this year’s “Museum Night” at the gallery Mala.

Ever since Homer, artists have been addressing the issue of weightlessness. Other important examples are Dante’s Sisyphus, Giambologna’s Mercury and Brancusi’s Bird in Space.[2] However, the weightless sculptures floating underwater designed by Popijač are distinctly different from the all of the above, just as they are different from the weightless sculptures by Kathleen Ryan (weightless only by name), or from underwater sculptures by Jason deCaires Taylor, given the realism of the latter.[3] Some of these sculptures by Popijač are abstract and some are reminiscent of the human ear or more often the marine flora. The latter did influence the shapes of the sculptures. On the other hand, as Feđa Gavrilović points out, these “biomorphic forms can remind us of the arms or refined bones of an alien being”.[4]

Apart from their different sizes and shapes, the way in which these sculptures were made is also unusual. The group of sculptures called “Man in the cosmos” was made while scubadiving near Milna (Brač) in the Adriatic, where Popijač actually completed a scubadiving course so that he could carry out this sculptural experiment. He used an unusual material to create the sculptures, a special kind of epoxy that can float and be modelled below the sea surface. The second, smaller group of works, “Cosmos in Man”, was created in the artist’s studio, in an aquarium filled with water and salt. The author points out that similar physical conditions are also used in “simulations of weightlessness at so-called neutral buoyancy laboratories at space research centers”.

From the title of the two works one can conclude that, besides the state of weightlessness, in the center of sculptor’s research one can find the Universe, its spatiality, gravity, and the reflection on the position of man and sculpture in relation to all of the above. In his reflections on the Universe, Popijač takes into account different mythologies and cosmogony. By creating his sculptures underwater, he annuls gravitation. His sculptures move freely in water, suggesting that standing in place is actually impossible in the Universe.

One can see that this is a highly conceptual work. By not using any base to create his sculptures and by aiming to annul the principles of statics, the artist contemplates the process of the creation of sculptures, their formal characteristics, as well as their relation to space. More broadly, he is concerned not only with sculpture as such, but also with man’s understanding of the laws of physics and his position within Universe. According to the artist’s interpretation, everything is in movement in the Universe. Therefore, with his sculptures exhibited in the aquarium, his goal is to stimulate a reflection on the relationship of art, man and the Universe.

Petar Popijač (born in Varaždin, June 9, 1988) graduated from Sculpture at the Academy of Fine Arts in Zagreb, and is working on his PhD, in the class of prof. art. Barišić Petar. Popijač is a member of the HDLU (Croatian Association of Artists) and HZSU (Croatian Freelance Artists Association). In his work, he creates syntheses of different media and visual expression styles. His Doctor’s research studies the limits of sculpture and analyses the characteristics of the sculpture form outside the conventions of statics.