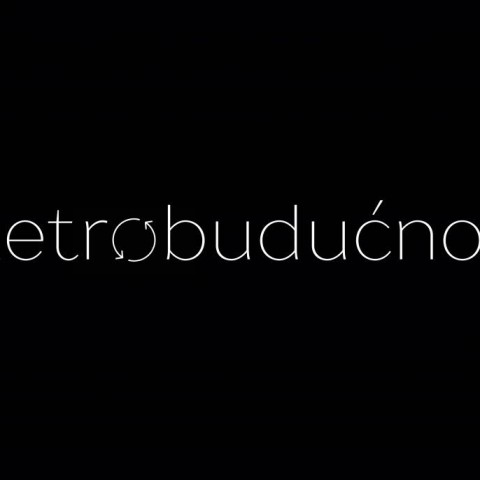 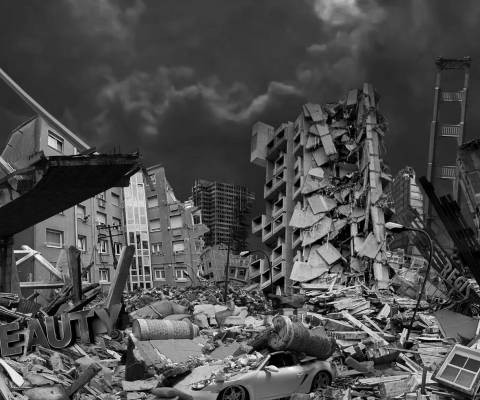 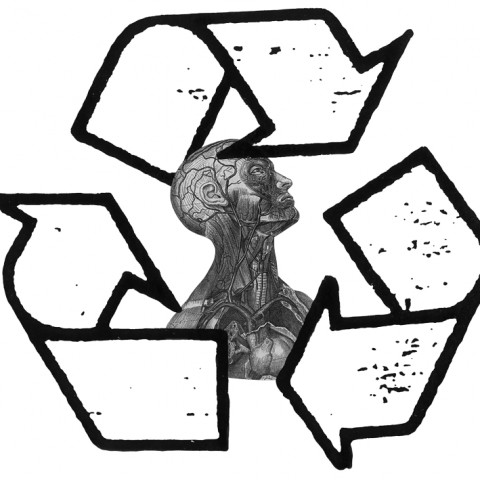 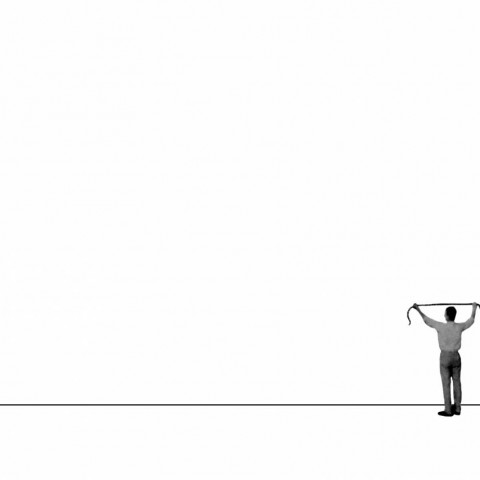 Since the beginning of his career, Eric del Castillo continuously dealt with the ways of presenting the personal conception of human nature – precisely of something that could be defined as human condition. It’s an abstract term which marks a wide spectrum of human characteristics, while del Castillo takes a special interest in human drama. Aside from biologically programmed needs and human lifespan (inevitably marked by birth and death), it seems that this „drama“ persists throughout our lives, taking different shapes and entering all social systems. It is also the thematic basis of del Castillo’s works in this exhibition, some of which are shown to the public for the first time ever.

This overview of del Castillo’s art production leads us into the exhibition currently taking place in Salon Galić in Split, titled Retrofuture. It is a neologism made by connecting contradicting markings which imply two different time states. Just like del Castillo’s works, this term was created through a process of collaging, gaining an interchanging, mobile semantic character. Considering the title and the wide timeframe of when the works were created, this exhibition could be seen as retrospective. This is further supported by the fact that all works were made in a black-and-white color scheme. So, the „retro“ part of the title  could easily be put into the spotlight and thus lead to the film effect of reconstructing the past (looking back). Still, as del Castillo really doesn’t have a burning reason or need to create a retrospective, Retrofuture rather functions as active browsing through his older and recent works and identifying the general places in the artist’s creative work.  This is what is important – and that’s what brings the „future“ part of the title – because, based on this, we can assume in which direction further del Castillo’s production will go; after all, his oeuvre can be defined as an open yet recurring narrative, consolidated by that vertical thematic axis with which he changes only his choice of motifs and the means of displaying them, but not their essence. It’s an ever-changing and ever-expanding process, a creative timeline with a developmental logic similar to the model of seeing our civilization as a historical spiral, del Castillo’s Atlas Mnemosyne.  So, Retrofuture marks a timeline of creativity based on a thematic constant, on a strategy of artistic recycling of visual motifs synchronized with the way of producing contemporary visual culture – all through a black-and-white filter of exhibited works. The latent characteristic of del Castillo’s overall oeuvre – including his works from this exhibition – is his semantic undefinition, while the observance of procedures used by the artist can enrich the repertoire of their possible meanings.

The beginning of del Castillo’s career is tied to the art series Delirious Dreams from 1986, made up from 9 compositions created at the border between collage and painting. The basis for these works was a Spanish photo magazine and an article on crime scene photography (from the French police archives since 1912 till 1940). The artist took over the photographs and intervened into them by framing them additionally or by highlighting certain elements of the compositions. The purpose of this decision is found in del Castillo’s opposition to his university colleagues’ opinions; while they were supporting academic painting expression in the service of a direct depiction of reality, del Castillo revolted, replying that there is nothing more real than that which is already in the photographs that he took from magazines. Del Castillo’s painting gesture additionally highlighted that which was already there, the tragic reality seen initially by the eyes of morticians.

In the 1990s, del Castillo primarily made collages on paper; most attention was given to those collages whose protagonists were in fact minimized human figures placed in relation to a much larger paper surface, often creating a humorous effect. It was sometimes further highlighted by the title (i.e. Measuring nothing 1991). A smaller part of original works are owned by the artist himself (the rest was sold, donated or lost), but their blueprints are stored in del Castillo’s digital archives and adjusted to the new manners of exhibiting.

The cycle Universal History of Infamy (2015) includes 9 digital collages (7 of which show the deadly sins from catholic catechism). Unlike del Castillo’s purified form language from the 1990s, this series has a much more complex composition, as each work resembles a frontal view of some architecture made of similar, iconographical elements. They are in the service of communicating subjective conception or the conceptualization of chosen topics. Here, we can clearly see that which is getting more prominent in del Castillo’s digital and video collages: a more dense interplay between the adopted visual materials which leads to overcrowded works. This horror vacui is most obvious in del Castillo’s most recent series of large digital collages Collapse, 2018-2019. Del Castillo’s painting colleagues questioned his choice to use collage as a painting medium, and those who work with classical collage techniques judged his use of computers while making collages. They seem to have forgotten that the role of the hand as a source for all art (including collage) didn’t disappear; instead, the artist connected the computer mouse (a tool) to the hand in order to expand its possibilities.

Three series of glass paintings from 2016 make a separate unit in this exhibition. The artist uses acrylic to paint glass, which is then placed over the collages. Del Castillo created the Narcoland series for a group exhibition The Reality Behind the Fantasy – La Reina del Sur in Michael Stock’s gallery in Vienna (July 3 – September 3, 2016). According to the idea of questioning whether there are „different displays of a visible hegemonic masculinity in different cultures and in history“,[13] Del Castillo explores the theme of Mexican narcoculture, a discourse about the South-American version of the Mafia, devoid of any romancing and subject to objectification. Riots is related to the same social discourse, and it was made within a wider framework of a project that was already presented in Salon Galić. The Sea Level series, formerly shown in an international exhibition Sea Change by Multimedia Cultural Center Split in 2017, follows its basis which explores „facing different problems in the context of sociopolitical, economy, culture and ecology shifts in coastal regions“.[14]

Del Castillo’s layered video collages created in 2018 and 2019 were based on the displacement of collage into a space of „new media“, in order to expand the possibilities of artistic expression. Unlike the compositions made of similar iconographic elements which confirm the titles of works (Universal History of Infamy, 2015), these works are dynamic visual rebuses which invoke the similar practice of „blurring“ the shown content in a tradition of powerful, almost occult symbolism and mystical works of artists such as Leonardo da Vinci, Albrecht Dürer or William Blake.

Del Castillo’s most recent works belong to a series of large-format digital collages. Together with the aforementioned digital collages, they mark the peak of his work in the field of perfecting media technology. Jasminka Babić concisely explains the themes of the works as „herding of layers which help the artist to show the magical circle of human suffering through the interpretation of motifs from history or history of art“.[15] Then, she sees that his works contain traces of works (or quotes) by Auguste Rodin, Hieronymous Bosch or Chapman brothers which then intertwine with images of destroyed cities.[16] She will conclude that the „entwining complex images points to the eternal repeating of historical, personal, family, social dramas, a certain determination for the demise of overall humanity and the collapse of the civilization as we know it“.[17]

In conclusion, Eric del Castillo’s entire art career is woven with primarily human, and then social themes in the horizon of the Western civilization. Collaging various adopted visual contents in different manners proved to be the ideal way of recording the complexity of the world of today. If we observe his work shown in this exhibition through an analogy with the Tower of Babel or the New Cathedral (from Universal History of Infamy, 2015), it could easily be presented as a complex building of a vertical logic, while this text could be a guide to understanding the broader context of its emergence and its „architecture“ elements.

[2] According to the titles and themes of his books: Surveiller et Punir: Naissance de la Prison, 1975; Histoire de la Sexualité, 1976

[5] In the horizon of contemporary visual critic, the term ‘author’ started to replace the term ‘artist’. Meanwhile, this term implies a creator unencumbered by the medium – an intermedial or multimedial artist.

[7] „All these artistic practices, although formally heterogeneous, have in common the recourse to already produced forms. They testify to a willingness to inscribe the work of art within a network of signs and significations, instead of considering it an autonomous or original form“ in: ibid, pg. 16.

Eric del Castillo, born in 1962 in Mexico City. Visual remixer/visual artist. He lives and works in Split. He studied film production and painting, and was professionally trained as art director and production designer for film and television. For 24 years he worked in Mexico in production companies, private and government television stations and has 61,319 hours of TV broadcast under his belt.

In 1986, he began his artistic career using the techniques of collage, appropriation and remix. Collage extends throughout his artistic work not only as the most important artistic technique, but as a way of thinking and acting in general. In 1995, he received fellowship from the National Fund for Arts and Culture (FONCA), Mexico, and the National Endowment for the Arts (NEA), USA. In 1996, he was resident artist at the Headlands Center for the Arts in San Francisco. Since 1987 he has participated in 16 solo shows and more than 100 group exhibitions in Mexico, Croatia, USA, Germany, Spain and Canada.