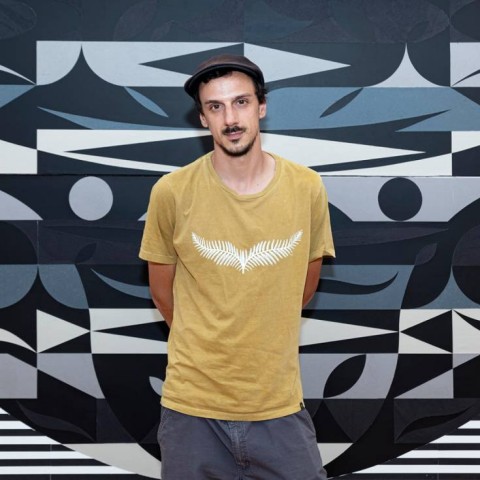 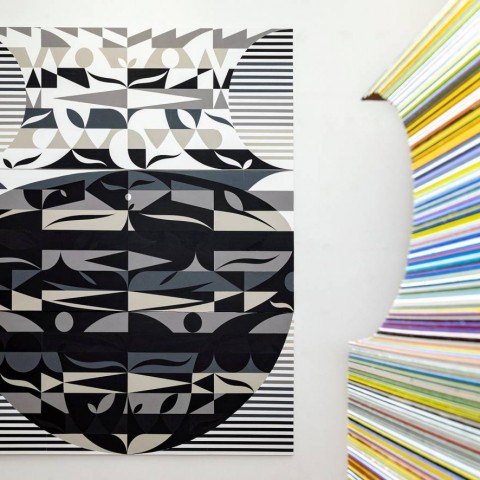 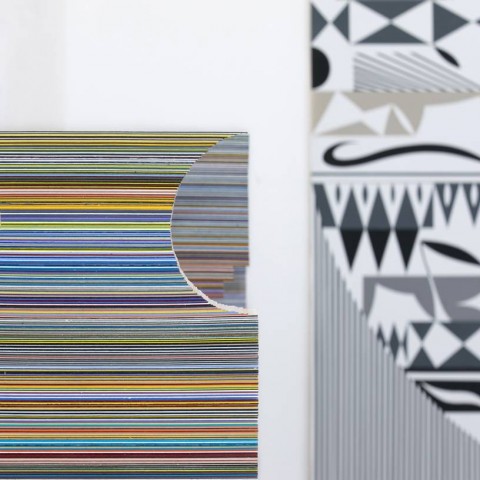 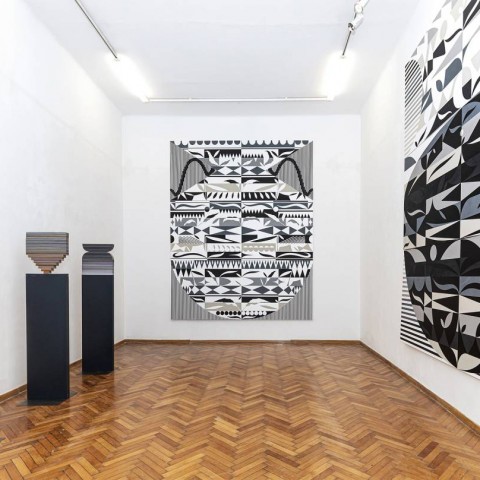 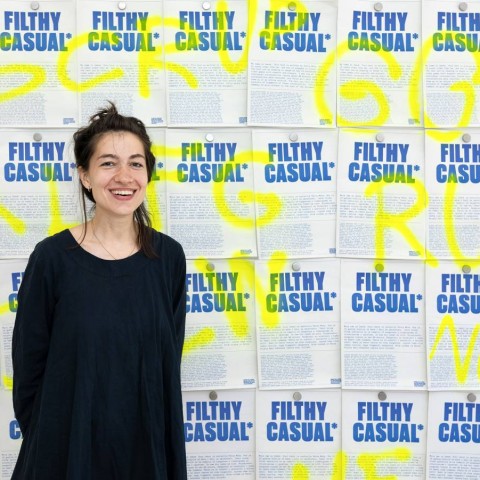 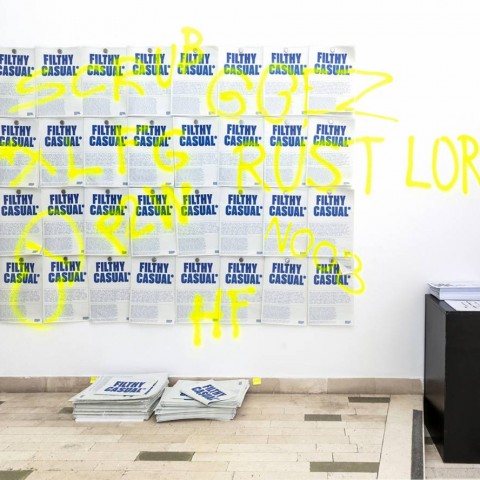 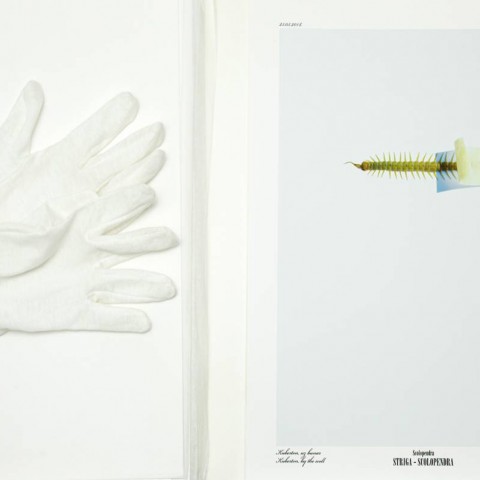 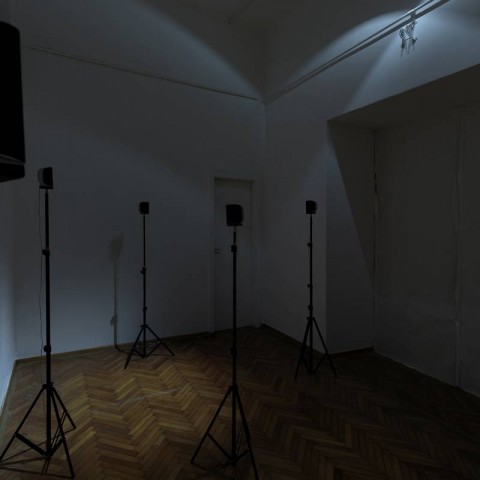 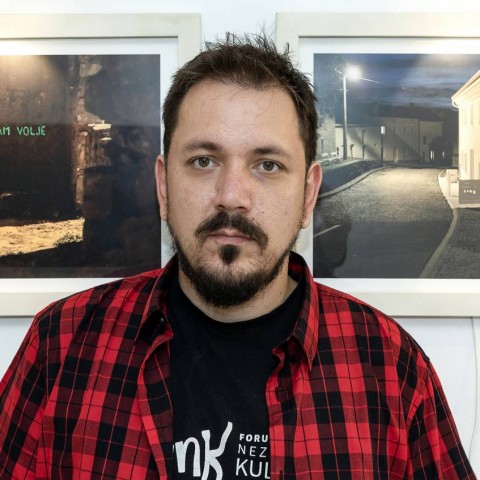 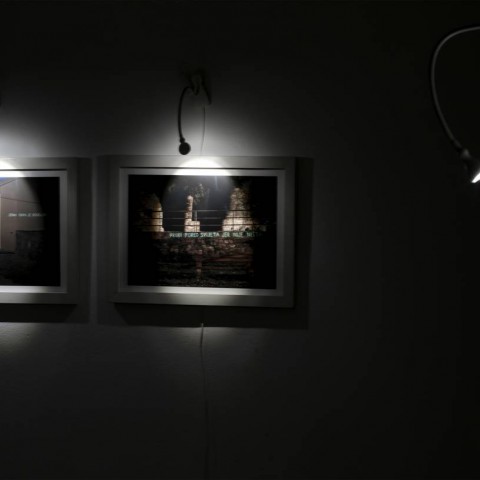 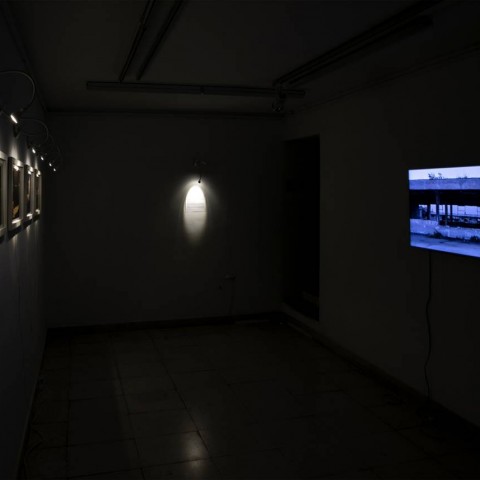 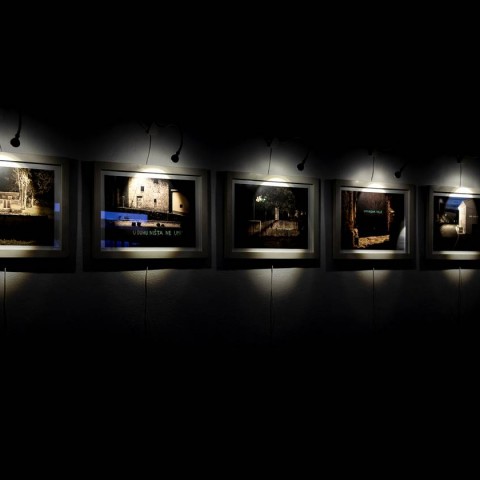 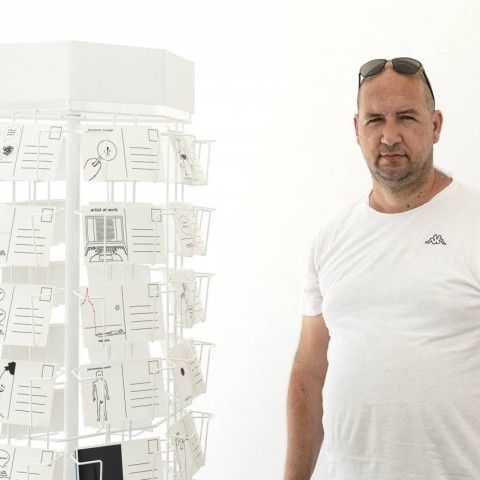 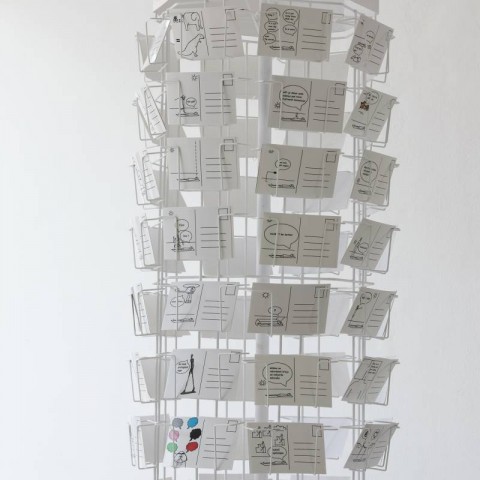 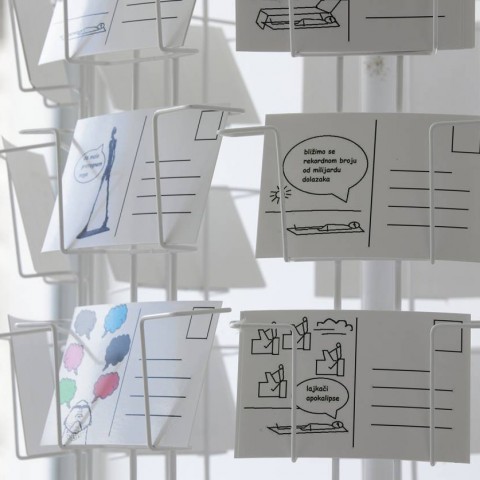 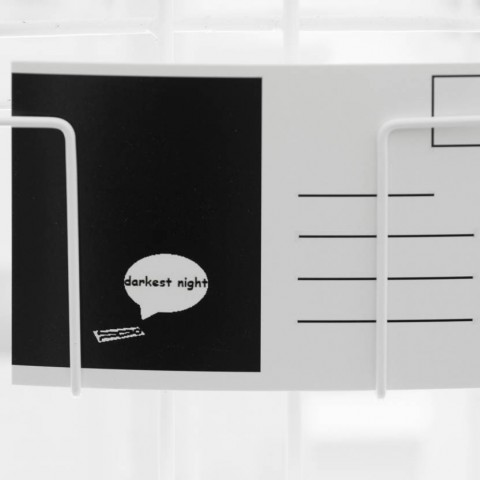 The man lying on the beach asks Rodin’s Thinker: Obsessing much? The Thinker: No, why do you ask?

This is one of 226 postcards exhibited at the exhibition Finale 2020! of the Radoslav Putar Award. Work is titled Tiring Vacation[1]. It speaks of the position of the artist. The social perception is that artists really don’t work and that they are on some kind of lifelong vacation, especially conceptual artists.

I live in Hvar and Hvar is extremely tourism-oriented. Every normal being is in this or that way in the tourism business. My position is reversed, instead of renting apartments, freed of that duty, I am closer to tourists. I am writing the postcards and posting them on Facebook already for the 4th year in a row. They are some kind of zen postcards. They have no face, their face is empty, or their face is not a face – they are reversed. I create them in the Paint program mainly because of practical reasons and they have “a digital look”. The work refers to digital, virtual or the revolution of the social media. There is always one character repeating in the drawings, he just lies there, talking mostly to himself. There are lots of autobiographical elements in him and, you can say that he is an idealised version of me. A good way to read the work is with an empty mind. There is nothing to understand and the work doesn’t have any hidden meaning – all there is – is on the surface. The element of humour is there like door the “higher consciousness”, with humour everything becomes easier and humour can’t be learned. One of the postcards says „Ideas usually come to me when I stop thinking.” So, what is demanded from me as the author and the observer of the work is – not to think.

I have decided to accept donations in the gallery. At first, I intended to sell the postcards, but because of the procedure complexity, I opted for donations. The stand with the postcards is on the display in the gallery window and the idea is that it becomes invisible, as one of many window-displays in the street. With Tiring Vacation, I work for real – accepting donations – and it is one of the rare opportunities to earn with my own work. If nothing else, at least that.

[1] The literal translation from Croatian would be the Annual fatigue, which is the opposite of the annual rest denoting the annual leave, a syntagma used for vacation.

conceptual approach to the work. Since I don’t have a formal art education, I am not

consistent in using one, specific medium, but the very idea I want to express selects the most suitable medium for itself. Although I have not received an art education at any academy, since 2013 I have been working on art exhibitions at the AK Gallery, which exhibits exclusively contemporary artists and through over 70 exhibitions I have met many authors, each of whom has contributed to my education and understanding of contemporary art.

My primary interests while studying were language, literature and theater, and from this

source I developed what I can call my own artistic preoccupations: testing the boundaries of

stuttered. ” In addition to that, an important personal determinant of my work is my speech

defect, that is, my stuttering as a mechanical consequence of childhood traumas. Therefore, I would call my artistic work, in Deleuzian sense, a stutter of language, in both literal and

Almost every work of mine originates in a language – from a word, syntagm, sentence, text or book – whatever comes from that point in the form of an artistic idea seeks to extend the

primary meaning of that linguistic structure, that is, to stretch the boundaries of the semantic field within which the idea itself originated.

Through my work, I separate the whole of social life and I study phenomena such as performativity of family roles, contemporary upbringing, body representation, nature or foreign culture, guided by the belief that private is political and that accepting the status quo is an ideological position. Having this in mind, my works are researches and manifestations of alternative responses to discipline and obedience at the micro-level. These researches are often played out in intimate and / or collective social situations that include immersing in unfamiliar situations with an invited group of people. In this way, the temporary members of the group are the generators of a common experience. The mentioned methodology favours and supports a collective and joint approach to content development, as well as curiosity, attention and unpredictability of results. Parts of the described process are mainly offered to the audience through a visual medium (photographs, collage, video, art book, installation). In this way, I use the visualization tools to generate displays that interfere with and contrast the existing representations of social arrangements that are widespread through physical and virtual environments (e.g., Rehearsing Family, 2016, Are You Sure You Want to Leave the Game? 2019). Through such an approach, I seek to encourage viewers to allow themselves separation of their own presupposed beliefs to encourage criticism, imagination, collectivity.

The Palindrom series consists of 26 large works which can be presented individually or as elements of  diptychs or triptychs. At this exhibition, I present 9 works as 3 triptychs. Those works are made in paper collage technique, without a previously made scetch, intuitively. Left side of paintings are in positive in relation to the left sides, in negative.

My work is based on geometric abstraction. I think about composition, shape and color, but in the last year I have been intensively thinking about work as an object.

While working for my exhibition in Lauba (February, 2020), the focus was on 100 x 270 cm monolitic canvases that were turned into diptychs and triptychs and filled up a large gallery space, the other works I exhibited were cardboard objects. These objests were artworks that were continued from previous work that I did in April last year when I attended a residency program in Leipzig, togetherwith Miran Blažek and Ana Ratković-Sobota.

The object are 40x40x5 cm in size and consists of a 1mm thick cardboard that is painted and stacked on top of each other. Each object consists of 400 cut pieces of cardboard. The objects are on a postament that l made of mediapan, also 40 cm wide and 5 cm thick but 120 cm high.

Objects show an outline that changes with each next object, shapes are mostly basic, semicircles, triangles, stepped shapes, very simple clean lines that flirt with the paintings in gallery space, creating a dialogue between them. Also, the objects include 3 smaller works that show the transformation of primary to secondary colors.

He is a winner of one of three equivalent prizes in 39th Split Salon. Has realised public sculpture in town of Hvar.

Bojan Koštić, 1988; Koprivnica – He received his master’s degree in Croatology and completed his undergraduate study in Latin language and literature. During his studies, he engaged in journalism and literary criticism. He is the founder and general secretary of the Pod galgama Association as part of which he staged the author’s play “Krleža’s Love Quiz”. He is the co-author of the book “Krležin eu/ropski furiosum” published by the Pod galgama association. He is an active member of the Mamuze association, and the founder and coordinator of the FUNK Association of Independent Culture Association Forum, and works as a curator and technician at the AK Gallery. Deals with photography, video and performance. He has been exhibiting since 2016.

Petra Mrša, 1985., Rijeka – graduated Photography at the Academy of Dramatic Arts, Sociology at the Faculty of Humanities and Social Sciences, and Psy­chology at the University Department of Croatian Studies at the University of Zagreb. Her artworks are included in the collections of the Museum of Arts and Crafts in Zagreb, Rigo Galery and the City Museum of Zagreb, and were exhibited at numerous solo and group shows. She has published artist books New School (Pazzini Editore) and Rehearsing family (Museum of Modern and Contemporary Art, Rijeka). She worked as an assistant at the Hoxton Gallery in London and for the last four years has been employed as an assistant at the Department for photography at the Academy of Applied Arts in Rijeka. She was taking a part in the postgraduate international art program WHW Akademija run by curatorial collective What, How & for Whom/WHW in Zagreb. The prima­ry field of her artistic work lies in researching the way how acquired constructs shape the lives of individuals.

He worked as an associate professor at the Department of Fine Arts and Graphic Design at the Faculty of Graphic Arts in Zagreb. He participated in the Scientific and Professional Meeting Aestheticization and Rehumanization of Public Space, Art as Therapy, Painting KBC Rebro, Zagreb, 2017. He is a recipient of the Young Artist Award for 2017. He is a member of the HDLU and HZSU. He lives and works in Zagreb.