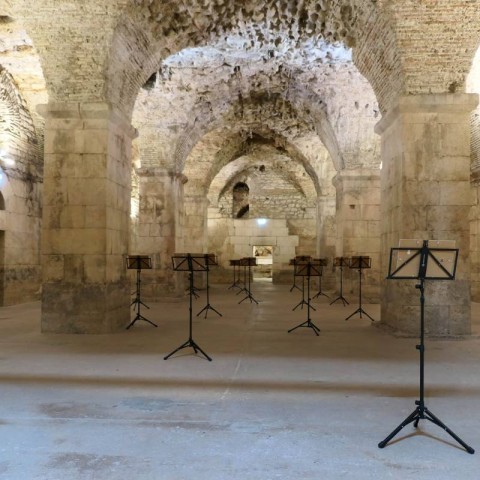 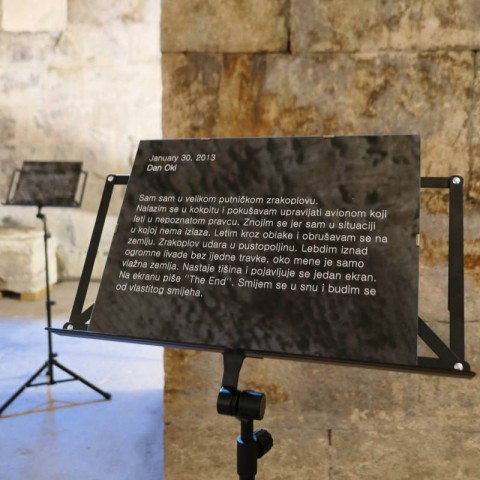 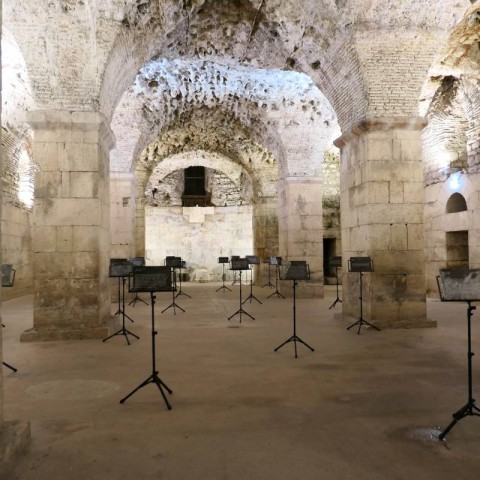 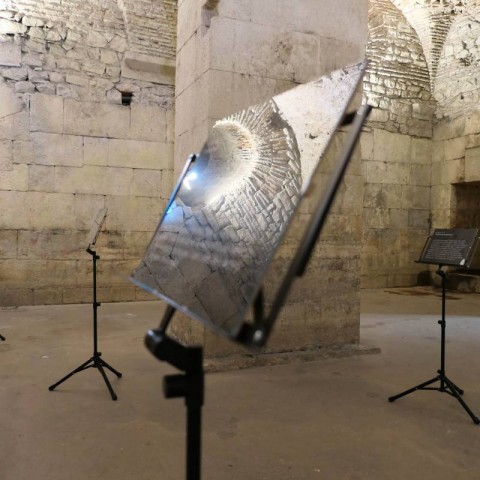 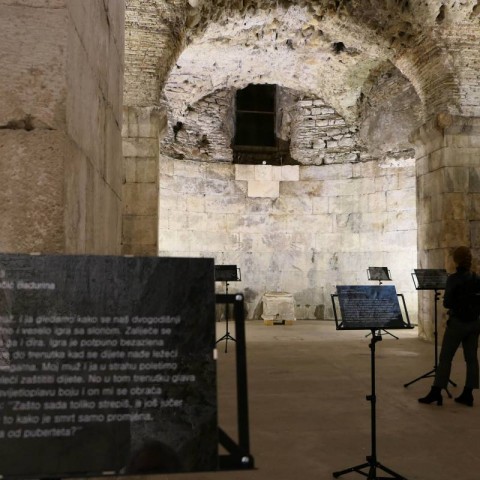 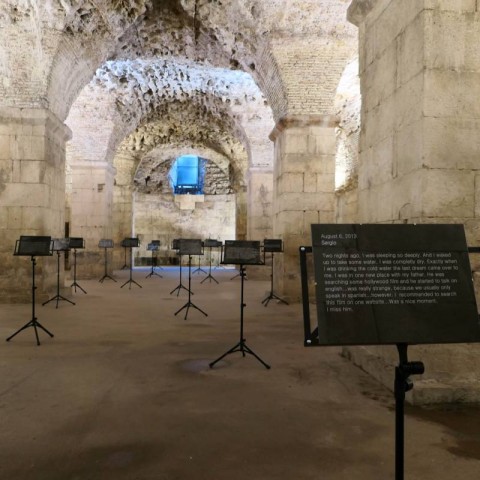 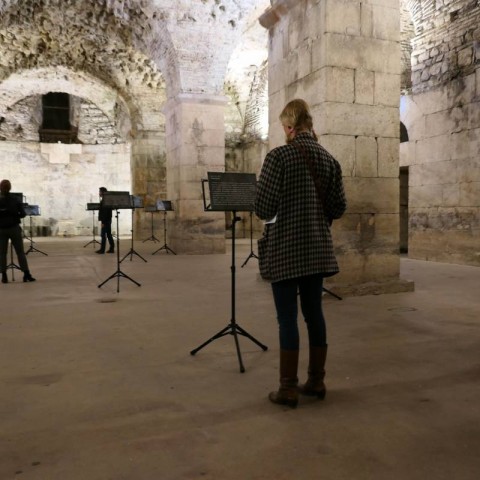 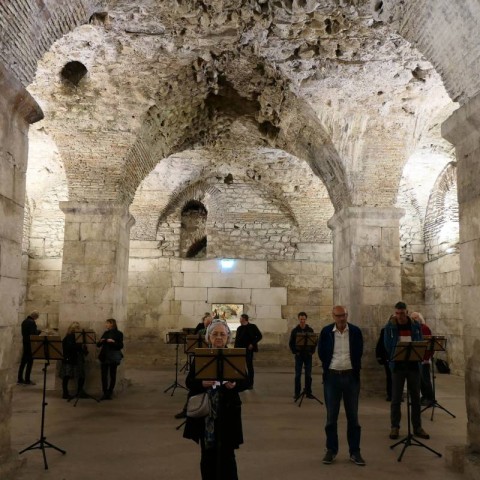 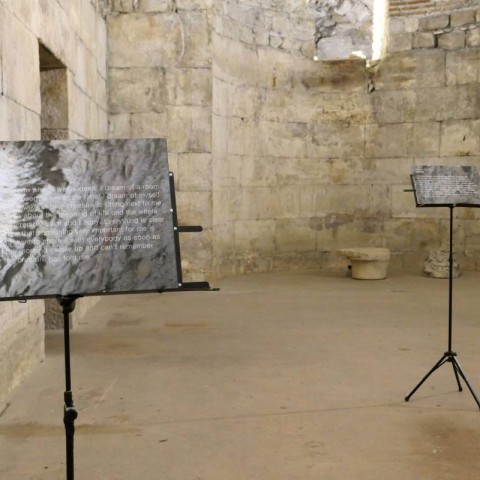 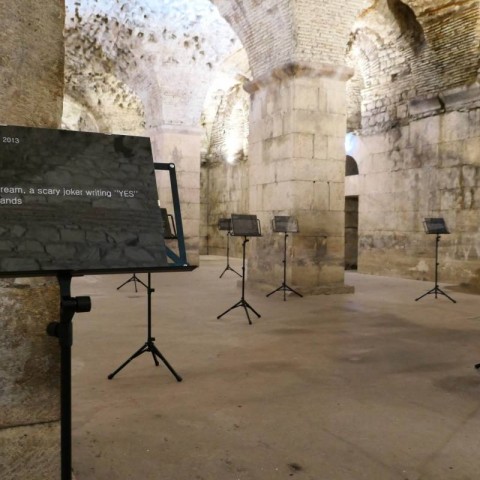 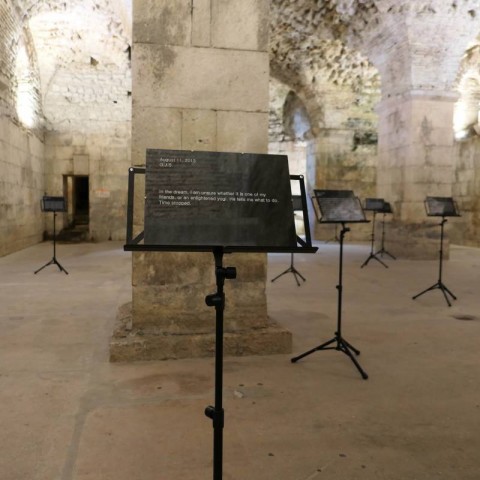 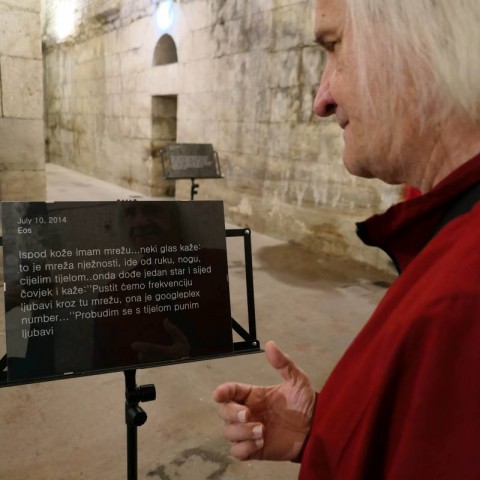 „The unconscious isn’t a demonic monster, but a thing of nature that is perfectly neutral as far as moral sense, aesthetic taste, and intellectual judgment go. It is dangerous only when our conscious attitude towards it becomes hopelessly false. And this danger grows in the measure that we practice repressions. To the degree that we repress it, its danger increases. But the moment the patient begins to assimilate contents that were previously unconscious, its danger diminishes. My critics fear overshadowing the conscious by the unconscious, and that in fact happens when the unconscious (through suppression, wrong interpretation or devaluation) gets distracted from its cooperation with the conscious.“C.G. Jung[1]

Kata Mijatović uses her exhibition (a site-specific ambient installation Resume / Inconscie) in the Diocletian’s palace to establish dialog between two of her earlier works; using the recorded sound from her performance Resume and 30 chosen prints (30x40cm) of dreams taken from the interactive Web domain Arhiv snova[2] (Dream Archive), placing them on a note stand. Dream Archives are a part of her work  Između neba i zemlje presented by her and Branko Franceschi (curator) at the 55th Venice Biennial in 2013. In this short review, I will try to at least touch upon and resume the unconscious. The performance Resume[3] was based on the artist’s endeavor to maintain her dream – to make it „visible“, and to take this eruptive flash of inner energy and to add form to it by creating an introspective image. All in all, in this dream Kata descends into an abandoned coal mine, encountering: loads of coal, shovels and loading carts; she loads the carts with coal and takes it outside to the light of the day.  After several years, she saw this dream to be a paraphrase of her own artistic practice because she, as an artist, often deal with the relationship between the conscious and the unconscious, trying to raise the contents which she, through the process of her work, is trying to bring to the surface. The cold, black coal, this safely“ stored stash of warmth which (triggered by a spark) changes its state of matter and (through alchemy – from black matter to hot red possibility) releases potentially enormous numbers of archetypal, unconscious images. On the one hand, there is the clear, cutting sound of loading and its transport from the world of death into the world of burning images (and vice-versa, if we look at the work from the perspective of social context and the artist’s engagement) which keeps the spirit alive – a spirit that yearns quality sleep and diving into the images of the „other side“. On the other hand, there are 30 dreams chosen from an archive of dreams: 30 chosen images of the unconscious which must leave the innermost depths of the soul at all costs and to send a message to the trivial worlds, to show direction, to change from non-material to material. They were chosen according to their mutual characteristic: the artist chose those dreams in which she unconsciously tries sending out messages using dream voices, written texts, spoken sentences, letters and communication devices…[4] Unfortunately, despite everything, humans never notice or understand things fully. At some point, hey reach uncertainty, which cannot be overcome through conscious knowledge. Luckily, there are some unconscious methods of perception which we notice through intuition, meditaion, deep thinking or dreams, which use symbolic images in order to open up an unconscious path for all our senses. There is hope. Stop. Light at the beginning of the tunnel.

[4] There’s a web under my skin… A voice says: it’s a web of accetion; it goes from the hands, to legs, through the whole body… then, an old grey man comes and says: „We’ll let a frequency of love through that web, it’s agoogleplex number…“ I wake up with a body full of love. (Eos, July 10, 2014)

Kata Mijatović, visual artist, born in 1956 in Branjina. Member of the Swamp / Baranya Art Group. She studied painting from 1991 to 1993 at the Accademia di belle arti Firenze and continued her studies at the Academy of Fine Arts in Zagreb where she graduated in 1997. From 2005-2010 she was a member of the Artistic Committee of the Baranja Art Colony / BUK /. From 2005 -2019 Head of the AŽ Gallery Ateliers Žitnjak Zagreb. Since 2007 member of PLEH Art Group. She has exhibited in numerous solo and group exhibitions. In 2013, she participated in the 55th Venice Biennale, with the project “Between Heaven and Earth” / curated by Branko Franceschi /. He lives and works in Zagreb as an independent artist.