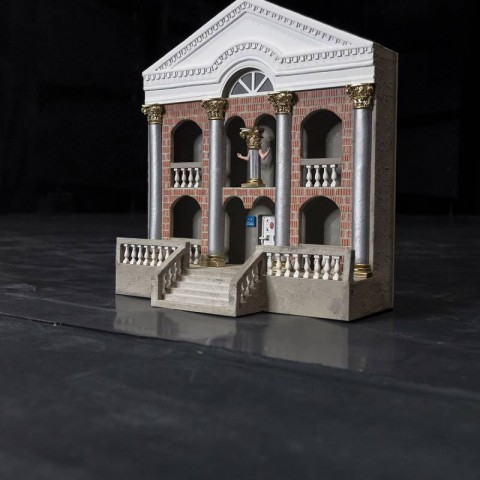 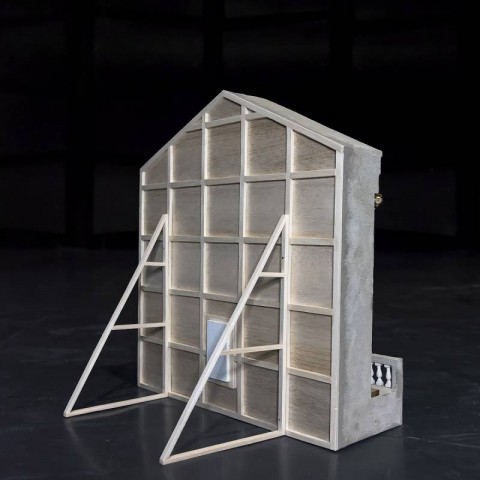 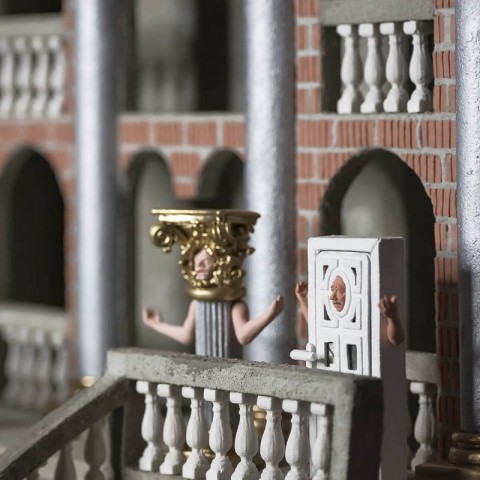 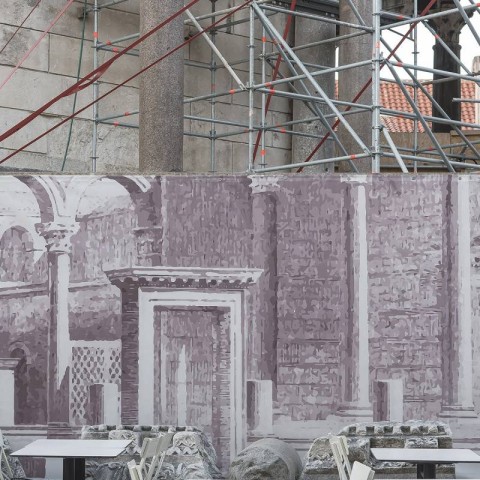 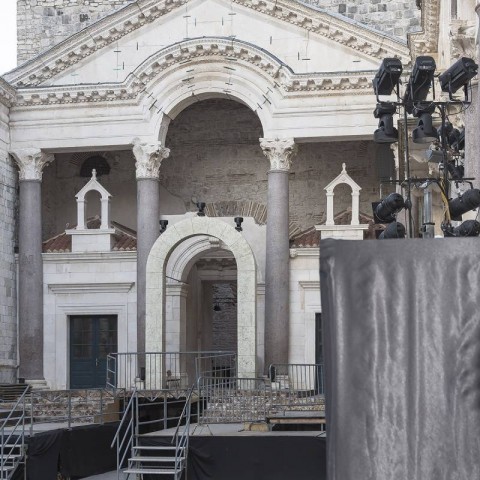 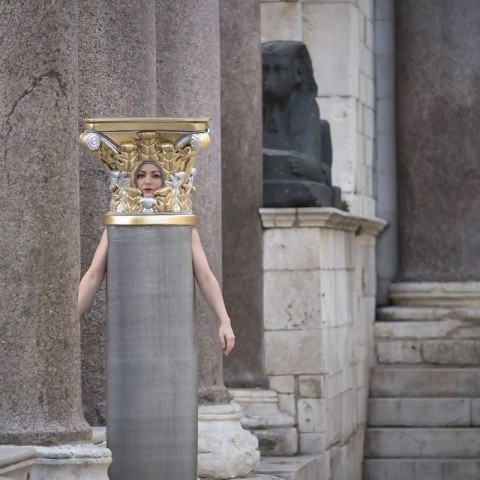 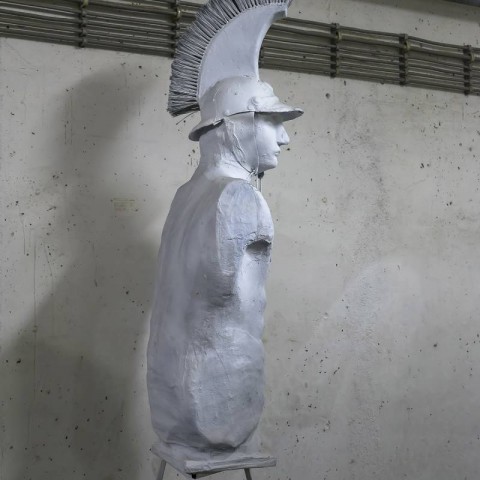 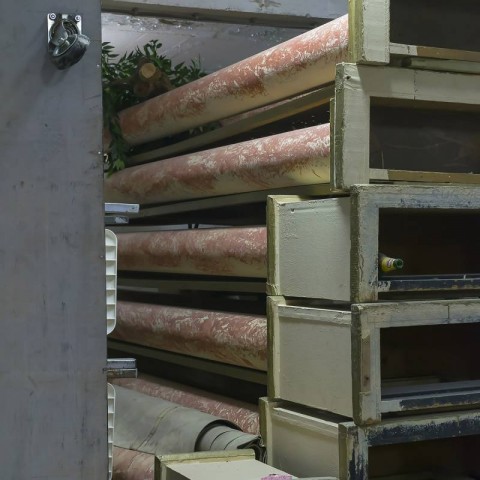 A common theme in the works by Lana Stojićević is the predominant form of contemporary architecture – apartment buildings – which is largely built illegally and haphazardly, and which shall be left for future generations in Dalmatia. Recognizing that such architecture is characterized by disproportionality and an inappropriate combination of diverse historical styles with contemporary architectural elements which, be they constructive or decorative, take on an ornamental role, Stojićević problematizes the methods, causes, and repercussions of such architecture in her multimedia works. As her primary method, she uses a scenographic approach, that is construction by using scenographic strategies such as farrago (a confusing mixture of various elements, most commonly photography and myth), capriccio (combining depictions of architectural buildings, ruins, and other architectural elements in order to create a fantastical scene), and faux (surfaces that mimic natural materials such as marble, stone, wood, but also materials such as imitation jewelry and synthetic fabrics that imitate fur and leather).

By directly relating apartment/illegal building with theatrical (illusory) techniques, but first and foremost with scenography, Stojićević urges us to think about the city as a scene and tourism as the mechanism behind the scene which powers the machinery of parasitizing and profiting off of cultural heritage. Thus, tourism introduces various scenes (two-dimensional, erratic scenographies) into historical architecture that, much like a Potemkin village, try to convince us of the authenticity of ancient heritage, which is, in fact, violated by the luxury accommodation it provides. With the aim of providing an authentic offer on the market, tourism creates an illusion which we agree to and introduces various neo-styles in order to translate symbolic capital into economical capital. These neo-styles pretend to be something they are not – historical styles – originating outside of the original temporal context, created from inadequate materials in combination with contemporary architectural elements.

With the aim of deconstructing and depicting the ways in which neo-styles imitate historical styles for the purposes of tourism, Stojićević applies a combination of architectural, artistic, documentary, and theatrical techniques. On the one hand, she focuses on the depots for the scenography, costumes, and props of the Croatian National Theater in Split, from which the original stimulus for this artistic exploration stems. On the other hand, she focuses on Diocletian’s Palace which is fraught with historical styles, or rather adjuncts from various time periods. In Stojićević’s works, the Peristyle is singled out as a symbol of these processes, as an actual piece of ancient heritage filled with historical appendices which, to this day, are scenographically built upon for the purposes of the Split Summer Festival. Lana Stojićević provides the Peristyle with a scenography of its own, in the form of a model, for an imaginary performance. This is fitting given that this is a place which, every summer, becomes a stage intended for performances in a public space.

The scenographic addendum to the Peristyle introduced by Stojićević is precisely the kind that often characterizes illegal construction: plaster casts of fences, unmortared building blocks, PVC carpentry, neoclassical pediments, concrete staircases and ramps, and gold and silver facades. Between the ancient architectural row of columns, new elements are thus admitted, walling up the spaces in between them, adding terraces and a portico, transforming an open, public space into an apartment building. Of all these architectural elements which are added onto the Peristyle, Stojićević calls attention to the neo-Corinthian column and PVC door as the exponents of contemporary neo-styles which proliferate throughout Dalmatia. She personifies them as characters in a neo-ancient tragedy: Betonicus and Plasticus.

In order to create as believable as possible an illusion of the personification of a concrete neo-Corinthian column and PVC door, Stojićević makes costumes and dresses herself up in them. What’s more, dressed as a neo-Corinthian column, taking on the role of Betonicus, Stojićević patrols the locations within Diocletian’s Palace and its surroundings, documenting this in a series of photographs. The golden-silver Betonicus thus appears as one of the columns on the Peristyle, and then in the Croatian National Theater’s scenographic depot. Meanwhile, Plasticus carries with him a prop signaling his quality classification – the international star rating table which confirms that a living unit meets apartment standards.

By making and wearing the costumes of Betonicus and Plasticus, Stojićević gives them a persona, a voice, the ability to move and be in different locations. They become mascots, visual identities of the city, a symbol of the interjection of neo-stylistic elements and a symptom of the infiltration of tourism and apartment properties all over Dalmatia.  By seeing these mascots in different locations, one comes to perceive that such annexed and inappropriate neo-elements bear witness to the penetration of individual tastes into the public domain, to the leaving behind of an inauthentic stamp based on personal preference devoid of any respect whatsoever towards the surroundings they are in – be they ancient remains or a natural environment.

Another stage prop that Stojićević introduces into her installation testifies to this – a passage from a neo-ancient tragedy in which Betonicus complains about not being made of marble, like the ancient columns of the Palace, but instead being poured from concrete like a copy that doesn’t even aspire to pass for an original. He feels redundant, out of place, lacking meaning and purpose, like a dismantled piece of scenography from the most disparate plays, being stored in the depots of the Croatian National Theater in Split. By depicting him, personified, in this new context, Stojićević begs us to ask the question: what will happen when the play called tourism ends? What happens when, due to unforeseen circumstances (Coronavirus, earthquakes), apartment buildings lose their purpose for an indefinite period of time? By utilizing illusions, Lana Stojićević shatters illusions. By stage and visual means, she deconstructs the theatrical mechanisms of tourism, the mechanisms of “beautifying” and “advancement” of heritage for the sake of luxury services.

Unplastered, yet magnificently decorated in an antique fashion.

What is the suffering of Sisyphus,

What the torment of Tantalus!

From cement have I been poured,

In gold and silver stained,

In a dream, again, the same images appeared:

Had I only in marble been carved,

Had I on the Peristyle been placed,

By Diocletian’s hand I’d have been caressed.

And a concrete fate befallen me!

The Gods have not explained such iniquity,

Why make the stairs of marble instead of me?

Lana Stojićević (Šibenik, 1989) utilizes photography, textile, costumes, and architectural models to explore themes such as haphazard construction, architectural heritage, and environmental pollution. She graduated from the Department of Painting at the Arts Academy in Split in 2012. She has exhibited at many solo and group exhibitions in Croatia and abroad and has taken part in several artist residencies. She has received multiple awards for her artistic work among which the following stand out: Metro Imaging Mentorship Award at the exhibition “New East Photo Prize” (London, 2016) and the annual award of the Croatian Association of Fine Artists for young artists (Zagreb, 2015). She was the finalist for the Radoslav Putar Award which is granted by the Institute of Contemporary Art (Zagreb, 2015) as well as the New East Photo Prize which is awarded by the Calvert 22 Foundation (London, 2016, 2018). She is a member of the Croatian Association of Independent Artists. She currently lives and works in Split.