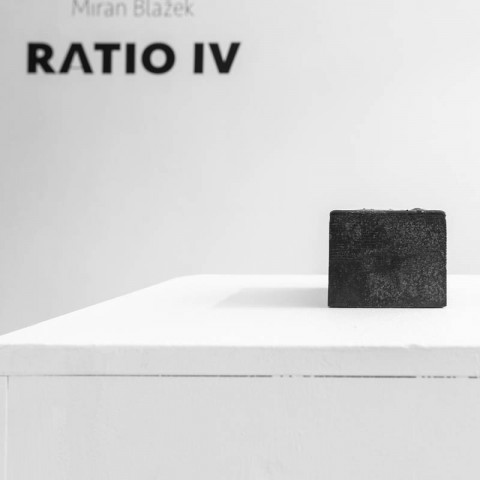 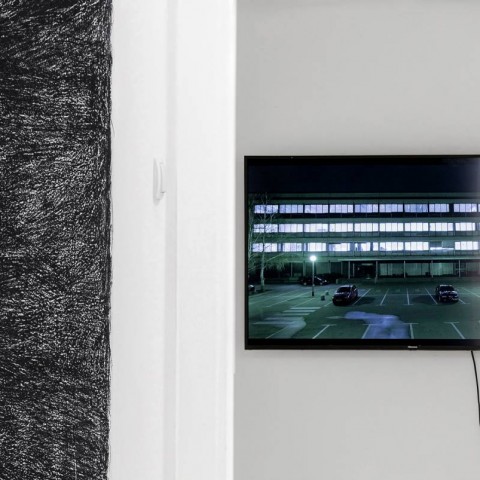 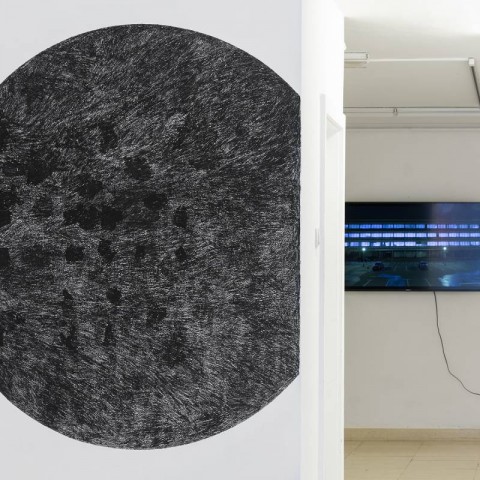 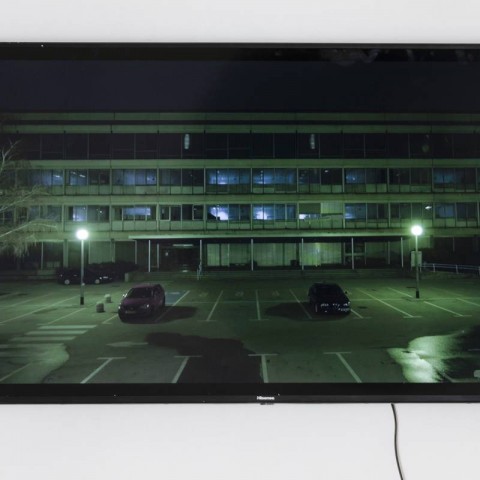 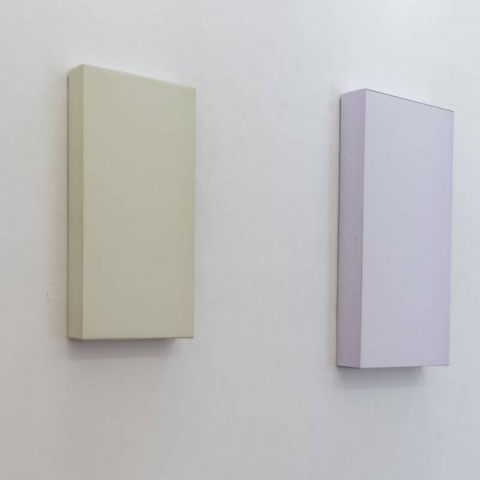 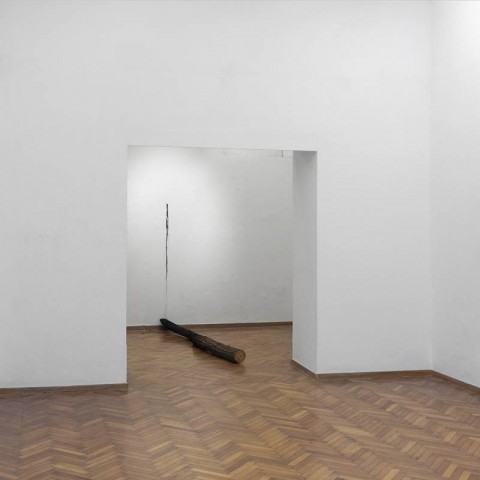 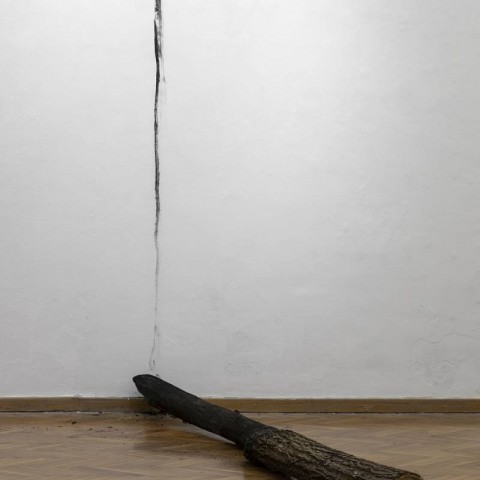 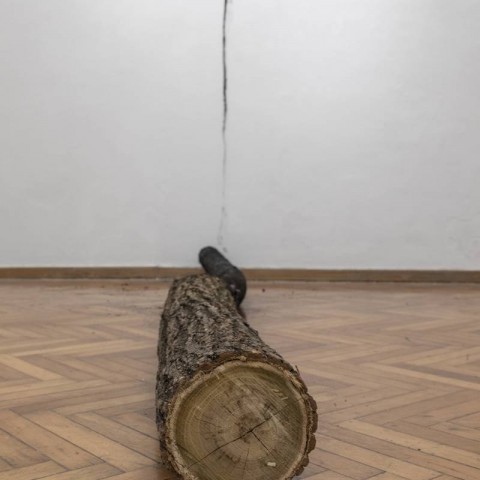 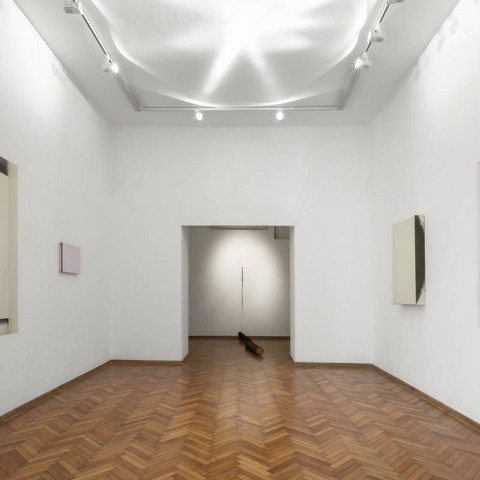 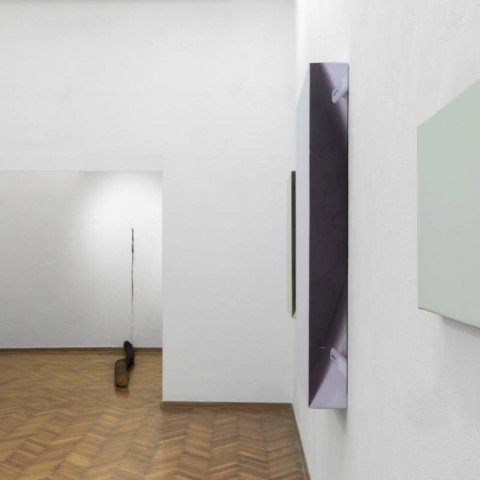 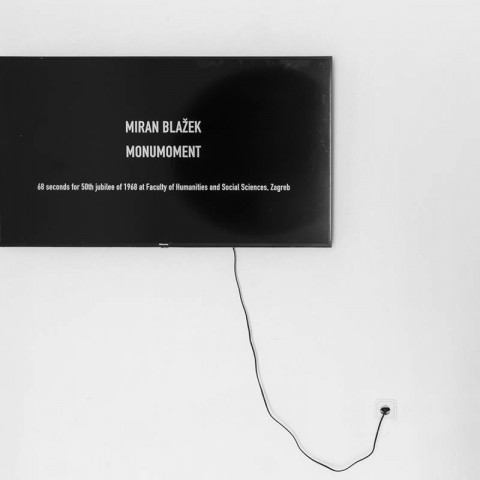 In the cultural history of humankind, there doesn’t exist a single painting which in itself does not already contain or imply an extrapictorial or intrapictorial space. Pictorial implications of space exist in two basic ways: it can be created through the artist’s intention or by the observer’s interpretative strategy. Be that as it may, in both cases, the recognition of space within a painting is not a result of the physical ability of one’s vision to discern a three-dimensional reality on a two-dimensional surface which is the painting. Rather, it – recognition – is always culturally constructed. Therefore, although paintings in themselves do not contain physical space, they assume, describe, or symbolize it in various ways.

The works of Miran Blažek deal with the pictorial articulation of space. But they do not do this by using mathematical strategies of a Cartesian model of representation, nor by using a scoptic regime of the “floating” eye. Neither do they do so by succumbing to increasingly more popular strategies of immersion into virtual experiences. Granted, Blažek does use all of these, but his artistic procedure consists of him coding his works in the language of conceptual art, which this artist has formed as a kind of anachronistic, sensorial, non-computational algorithm such as a set of symbolic instructions by which one level of spatiotemporal reality can be experienced in some different form and in another place. In each of the exhibited works, Diptych, Exhibition Wall, Monument, Eclipse, and Polyptych, we can recognize consistently conceptualized notions which classical art has used from its very beginning, such as surface and depth, space and time, painting and sculpture. But that which makes them most current is that they are here presented as recurrences of physical existence in an epoch of virtuality.

In Exhibition Wall, we see a three-dimensional partitional wall being moved from one exhibition space (in this case the Kazamat Gallery in Osijek) to a new space through the use of photographic reproduction. Along the lines of the analytic course of modern art, this work deconstructs one spatial situation in order to reconstruct it and, much like a virus, inject it into the foreign body of a different space. We recognize the artist’s original artistic intervention by its use of the medium of photography as a non-paradigmatic pictorial medium to “translocate” space. I refer to photography as a non-paradigmatic pictorial medium because it was initially designed as a solution that was, to the largest extent possible, supposed to approximate reality. In that, it necessarily distanced itself from the otherness of painting with regards to reality, which is the topic of notable texts by Gottfried Boehm and Martin Seel.[1] The series of monochromes is comprised of one digitally-modified photograph which was then printed onto different formats. Thus, we do not experience the medium of photography in this work as a conveyor of reality, but as an anamorphic link between irreducible dimensions of the space and time of painting. Therefore, photography is used here purely as a medium, devoid of symbolic meaning, whereas painting, by the introduction of a new, spatial, fictional wall, has broken through space and time, and become a three-dimensional object.

In the works Eclipse and Polyptych, this tenet is brought to the forefront even more. Specifically, the concept behind Eclipse is that the artist, in the classic technique of charcoal, draws a circle on each wall that forms a space. Each circle’s circumference is equal to the length of the arm with which the artist drew. Aside from this, each circle is placed in the geometric center of the wall on which it has been drawn. After they’ve been drawn, the circles take on a clearly two-dimensional aspect of a painting/drawing on the wall, but simultaneously define the boundaries of the area inside which they have been drawn. In Polyptych, we bear witness to a kind of threefold transubstantiation. Namely, the artist scraped the drawing charcoal, which had made possible the appearance of image to appear in this one place, in its material form. Upon scraping it off the wall and turning it into dust, he proceeded to mold it into a graphite brick by using a binder. This brick, therefore, now contains within itself a “record” of the previous space from which it was transferred, as well as the memory of another medium and shape – the charcoal circle – out of which it came to be. The space is primarily fenced by two-dimensional pictorial surfaces. These surfaces are then transformed into three-dimensional space which contains an invisible memorial record of all the previous spatio-temporal coordinates. Quite specifically, Polyptych compresses the memory of the spaces from its two previous incarnations; the work Ratio 2 presented in galleries in Zagreb and Labin, and the work Ratio 3 in a gallery in Dubrovnik.

Miran Blažek was born in 1983 in Osijek. He graduated from the Academy of Fine Arts in Zagreb at the Painting Department in 2006 and went on to complete the postgraduate magisterial program at the Akademija za likovno umetnost in oblikovanje in Ljubljana in 2012. He has exhibited at many solo and group exhibitions in Croatia and abroad and has taken part in several international artist residencies. Since 2014, he has been employed as a Teaching Assistant at the Academy of Arts and Culture in Osijek.

He was awarded the Radoslav Putar Award for the best young Croatian visual artist in 2012.