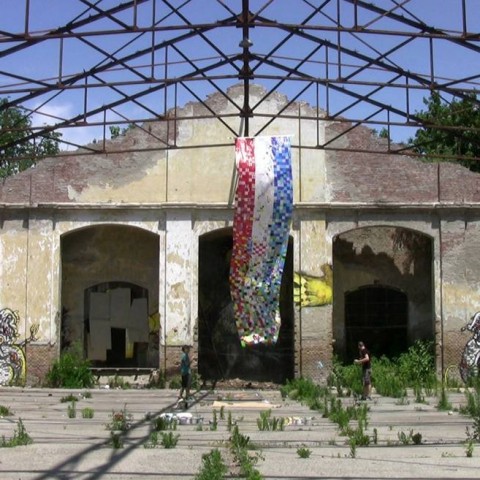 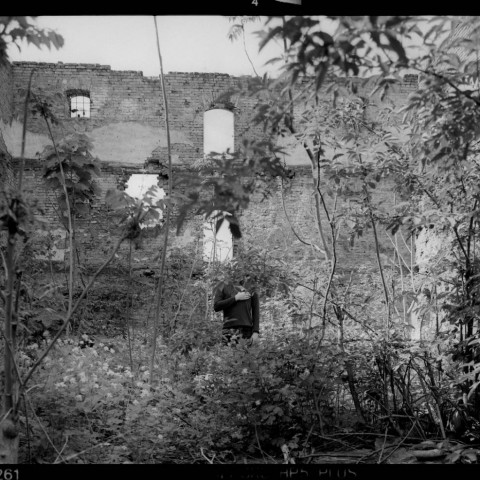 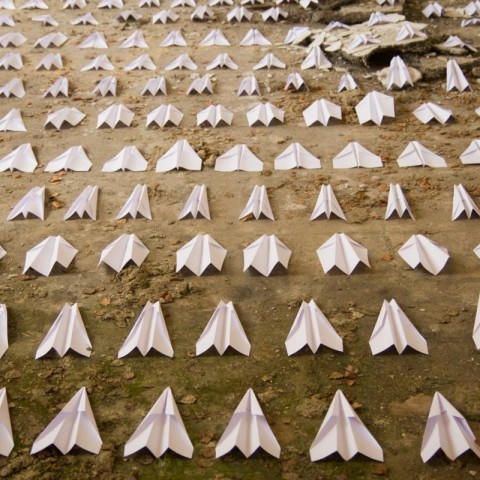 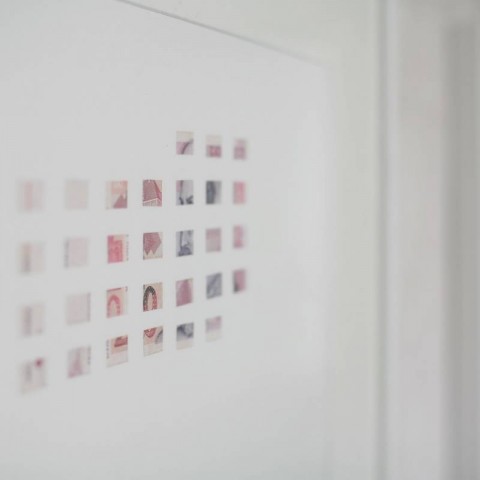 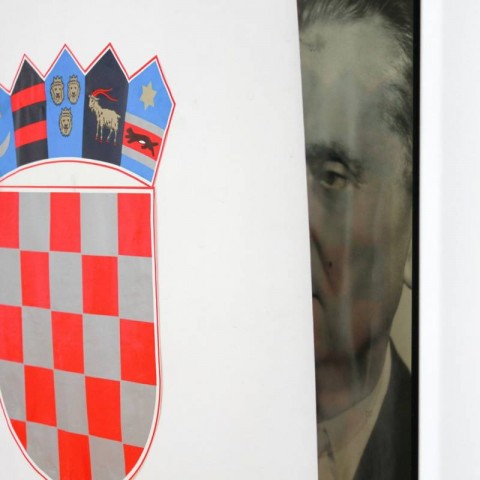 In a multitude of artistic poetics critically focused on socially unfavorable decisions and injustices that are produced almost daily by authorities in countries around the world, Mario Matoković takes a direct view of what he considers to be unsatisfactory in his own homeland through his work, and sets out substantive questions about living conditions in Croatia and what it means to be Croat in the current circumstances. His works are a visual articulation of thinking about the relationship between the state and its inhabitants, and are based on the belief that the state is primarily considered a social construct that should not be immune to re-examination and change.

Matoković’s production is bulky and divers (media-wise), and his artistic worldview is not carrying an activist toe but rather a critical one. The reason is that, according to the artist’s thinking, art itself lacks power to directly alter an existing social or political paradigm, but on the other hand it does not mean that his works communicate only apathy or resignation. Although every work at the exhibition in Salon Galić problematizes some of the negative features of life in Croatia in its own way and thus inevitably reminds the observer of the current flow of tense topics such as unemployment, emigration, bad demographics or corruption, this repeated “opening of the wounds” is a strategy pointed at the audience, crying for its reaction. This is some sort of call for conscience where Matoković as an artist (an invisible and passive interlocutor) or an actor (visible and active interlocutor) in his works (“documents” that illustrate the Croatian present referring to its recent past) tries to contact the gallery visitors to voice on the issue represented at the exhibition. Matoković’s art is at the same time subversive and deeply anarchistic because its initial task is encouraging the audience to pronounce their own attitude in relation to what his works are talking about and which is, conveniently, often not talked about. It is also primarily focused on an individual because the community is much more difficult to be pushed.
Apart from being inspired by the possibility of any constructive change that could potentially be derived from a frank insight into our reality, Matoković’s starting point is based on a loathing toward latent states, and his inspiration is found daily in his immediate environment (he will say that in Croatia stupidity is indestructible). One of the examples of the mentioned states for Matoković is that which is the consequence of, according to many, the most prominent features of Croatian society today: a lack of confidence and the inability to help oneself. Matoković’s art is a means by which he wants to awaken an individual’s responsibility and encourage their will to change things which require collective commitment and perseverance of a larger community. Although such an approach can be described as utopian and even unrealistic, his determination does not fade and is reflected in the rejection of alibi and statements like “come on, do not do it now” or “you’re still young, there is plenty of time!”, all in favor of nurturing specific ethics “persevere, do not give up! “, which is a saying of not only his private but also his artistic life and work.

The works of this exhibition are marked with a suggestive and acceptable artistic expression, which is understandable as one of the above mentioned features of Matoković’s production is the focus on visitors to the gallery space. Part of the work is also showing the artist’s cynicism, which is somewhat explicit (in the titles of works like To All of Those People Who Destroyed My City). Matoković’s works are based on interpretations and references to events from the recent Croatian past, as well as on the examination of the state organization that declaratively guarantees the values ​​that are now only traceable. Thus, with Flag (2011, original title Zastava), Matoković uses a recognizable motif, the Croatian flag tricolor with the coat of arms, but his derivative is made of multicolored plastic, becoming a parody of the original design of the state emblem. Instead of the silk woven flag, what we see is a “fake”; although the visual identity of the Republic of Croatia can be seen, it is clear that this “plastic” flag has no official significance. This act is undeniably humorous, but behind there is a court that compares the relationship between the original and the faulty copy of the flag with Croatia as a state of enviable opportunities that is failing to realize its great potential. The material of the work is picturesquely speaking about one of the possible reasons for it: plastics as one of the largest polluters on the planet symbolizes large corporations and their significant influence on state policy, and Matoković is most frustrated by serving foreign interests in terms of selling Slavonia, the coast and the islands.

Untitled (2015) is a framed Croatian coat of arms, which should, according to the law of the Republic of Croatia, be placed in the space of each state institution. It is a readymade object, a “chessboard” found in the basement of an Osijek elementary school, but after a closer look it was found that the coat of arms is just a sticker placed upon the photograph of Josip Broz Tito. Untitled is a palimpsest that points to the established habit of replacing the recognizable symbols of previous authorities with the current ones. These transformations happen suddenly, caused by something that borders with shame and disgust on the one hand, and under the auspices of new promises and national unity on the other hand. In the end, people usually wonder what system was worse for them. While sharing the similarity with the Flag in terms of showing a recognizable motif of a country, Untitled primarily points to the great extent of the masses attraction to the symbol and the tendency towards the sacralization of the secular, and there is a rising question of what is their status and what is the value of such symbols that are adored at one time and rejected in the other.

Triptych 8.9.10.2000. (2015) was created from recalling a reduced family budget in a period of the artist’s study and is an embodiment of a personal survival experience with twenty kuna per day (in a period of 3 months). Sixteen years later, Matoković’s twenty kuna were excluded from the usual discourse, banned from use, and through this presentation brought nearly to the status of an icon, undoubtedly imitating the significance that they had for him at the time. No matter that inspiration for this work is obviously coming from his personal experience, the improvisation of this type is a common occurrence for many families throughout Croatia. This work is also a dedication to parents who strive to provide their children with the most, in a system that gives less and less.

Homeland (2015) is a series of ten analogue photos depicting some of the locations affected by the war devastation of the 1990s. Once the living centers of life and work, today they are (still) devastated and unpleasant spaces that cause discomfort, with the exception of a restored elementary school of Nikola Andrić in Vukovar. However, due to the intolerance of ethnic diversity, the school is still a place of another type of trauma that is manifested in psychological abuse of children by their peers. Black-and-white photography creates an impression of retrospect, but the truth is that they show some parts of Croatia of today. In this work, Matoković appears as a solitary actor, in a static pose, with his hand on his heart and his eyes closed. There are numerous interpretations of these iconographic elements, but it is certainly the case of piety for victims of the Homeland War and of the call for concern for the devastated areas of the human body and the spirit in general.

While his character acts as a type of marker that points to spatial relationships and communicates the above messages in the Homeland series, in his work To All That People Who Destroyed My City (2017) Matoković is an active protagonist. This ironic dedication speaks of Osijek in the context of “one-kuna” privatization from the beginning of the nineties, that caused the decay of the economic sector in Croatia and also in Matoković’s city. The artist is in a kneeling position, but upright. He is giving honors and identifying with those who have been affected in any way by this development of events. In many families the consequences are still felt, thus Matoković offers this testimony in 2017. The work is a pictorial representation of spinning in circles, the inability to escape, and the “Way of the Cross” that is still ongoing, which is an association accented by by Matoković’s kneeling on the knee pads with thirty carvings made by one-kuna coins. It is a painful, unmanageable condition that is pronounced by constant moving on the knees that release blood on white paper. The artist returns from one end of the frame to the other, and white paper with bloody traces becomes a kind of a document, a trace of suffering that is still present, but not insurmountable; the new generation remembers. And learns.
One of Matoković’s most recent works, the Hypocritic Strategy (2018), refers to a state policy that instead of solving fundamental social problems such as unemployment and underdevelopment, prioritizes the commissioning of the fleet of used Israeli warplanes, justifying it by statingg that security of the Republic of Croatia is the main issue. Matoković’s paper planes ironize this decision of the Croatian Government and they are placed in a devastated space that is a pictorial symbol of the time in which they should remain.

Matoković’s art is described in this text by various adjectives as subversive, anarchistic, critical and somewhat cynical, but the ultimate judgment of it states that, despite its first impression, it is above all optimistic and truly patriotic because it is based on finding, referring and re-updating the problem in order for the community to catch up with them at the moment of reaching their civic maturity. However, the possibilities of change require time and capable individuals who will be the core of a better society tomorrow, and Matoković’s works and the decision to exhibit in Split show that he is certain to find these individiuals among the visitors of this exhibition.

Mario Matoković was born in Osijek in 1985. He graduated in 2010 from the Art Academy in Osijek at the Department of Fine Arts. He is professionally engaged in artistic activity in the field of contemporary visual practices through the media of graphics, video, installations and art photography. He has exhibited at numerous local and several international exhibitions. He has participated in several art festivals, workshops and projects at home and abroad. He is the winner of the Rector’s Award, University of Josip Juraj Strossmayer in Osijek. He was the finalist for Radoslav Putar, awards for artists under the age of 35, in organization of the Institute for Contemporary Art. In 2017, he was awarded the 3rd prize at the 5. Biennial Contemporary Art in Novorossiysk, Russia for his “Zastava” work. Matoković is the founder of the first artist residency as part of the private MMML Studio which was conceived as a platform for visual research, currently in short-term artist residences as well as projects that contribute to the enhancement of creative-critical opinions within the community. He lives and works in Osijek.