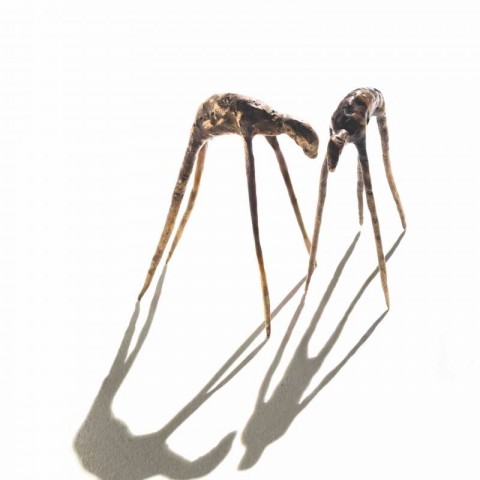 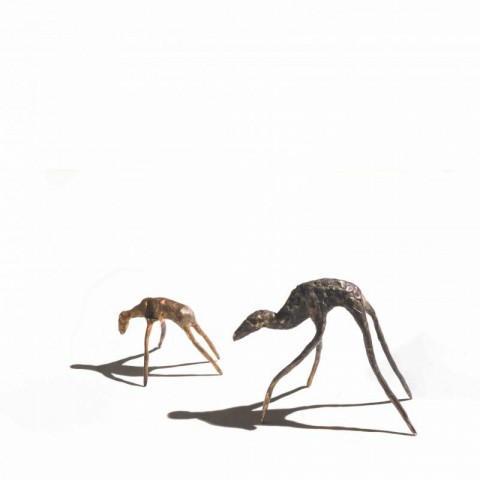 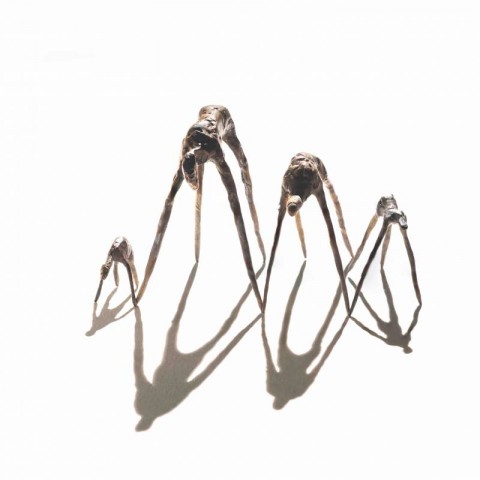 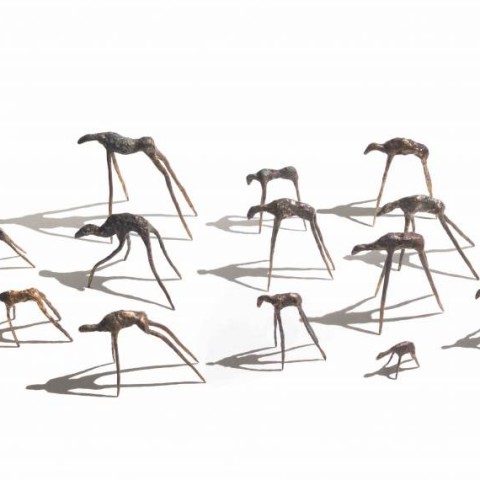 Each individual is a micro universe – specific, special and different – contacting many different micro universes on a daily basis. Through their interaction, they create communities in which individual characteristics are mixed, aligned with strict social norms and moral/ethical variables. Placed within a certain space, they affect their environment, changing it. More or less consciously. More or less conscientiously. In the same way (although often forgotten), the environment shapes them, defines them, both as individuals and as a community/society.

“Go West” is an exhibition that uses two tools to speak about certain worlds of each individual, dipped into the macrocosm of nature. Nature can’t be divided from the individual.  The narrator of this story is Aurox. Otherwise known as a powerful, untouchable being standing on long legs and reaching the sky, free and unlabelled by objects or implications, is now walking on Earth. He stands close to observers: vulnerable, feeble, worn out, mutated. The mighty Aurox is transformed and resembling of a carcass. His upper body is perforated, his limbs entangled. He is a being that humans could and still can affect: they can go through his twisted limbs and run their arms through his wounds. He is an animal that was destroyed through human contact, but is still degraded by our touch.  He’s a part of nature, which is a part of us. Destroying that which is natural, continuously manipulating in order to get more profit, we destroy our own selves. We become the carcass. At the same time, among other things, we start to see animal elements, elements that were lost along the way, which we destroyed within ourselves. These elements become strange and unknown to us. They scare us. We don’t see them as elements of humans; instead we see Others inside those elements. Others – micro universes unknown to our community, so foreign that we see them as dangerous. Fear of the unknown causes instinctive, animal reactions – fight or flight. Fear, ignorance and separation from ourselves cause us to destroy this being, or at least to use it.

“Go West” is dealing with the concept of Others/Otherness. It’s a series of bronze figures of beings that travel. At the first glance, we only see the physical form of the sculpture: bending spines, narrow heads, thin legs. The beings look monstrous. Animal elements are barely visible. These figures scare us, they look foreign, alien, unnatural. They belong to the Other, the unknown – potentitally invasive and dangerous. But, when we take a closer look at the creatures’ shadows: they seem human – bipedal, with clear lines and shapes of heads and limbs. The monstrosity of the form suddenly becomes recognizable and familiar. The concept of the Other is no longer written with a scary capital “O”, it is now but a mark of something that is different, but acceptable. “Go West” and its concept speak of humans as eternal travellers, foreigners, individuals who don’t belong. Globalization makes people migrate – permanently or temporarily, willingly or forcefully. Migrations make culture and social circles intertwine, making the community richer, but there is also a potential for xenophobia, racism, sociophobia. The Others are often labelled according to their skin color, nationality, religion or language. Encouraging this leads to the perception of Others as animals. The dark exhibition space now becomes symbolical: it represents the (un)conscious labels which are used when defining the unknown. The bronze figures rise from this darkness, like light beams. At this moment, observers become aware of their own dark veil of judgment: judgment that can be deadly for the Others and for us. Our instinct to destroy the unknown actually destroys ourselves. If we are to destroy the form of this animal being, we will also destroy its human shadow. The sculpture depicting Aurox is a tangible reminder of the consequences of our own insensitivity and intolerance. The contrast of miniatures and their human shadows with the huge carcass is like a butterfly effect on a smaller scale. IT directly shows how minute daily inconsideration and discrimination can lead to large forms of destruction.

Noa Geras (7.5.1995., Jerusalem, Israel) is a Croatian academic sculptor with MA from the Acadamy of Fine Arts Zagreb, Department of Sculpture (class of professor Petar Barišić). She has rich exhibition experience both in a group and individual exhibitions. She has exhibited as a part of Second Samobor’s salon (Gallery Prica, 2019, artwork: Go West), the 13th Triennale of Croatian Sculpture (Gliptoteka HAZU, 2018, artwork: Iron Aurox), international exhibition 20 Miniatures (Gallery Pro3or, Belgrade, artwork: New Gods), etc. She also held several individual exhibitions like Go West in Gallery f8 in Zagreb (2019.), Transformations on the island of Zlarin (2018.), etc. She has won the first prize for a series of sculptures named New Gods (International exhibition 20 Miniatures, Zaprešić) and Rector’s award for group project Sketch (2017/2018.). She has been part of many national and international projects, workshops and conferences and her artworks are part of the USA Embassy collection in Zagreb and private collections in the USA, Israel, Belarus, Italy, Island, and Croatia. At the moment she lives and works in London, UK. In her work, Noa Geras is concerned with social changes and social injustice, questions of ecology, specism, and migrations.